BRAND NEW EPISODES
YOKAI WATCH
All new episodes following the adventures of ﬁfth-grader Nate and his mysterious friends: the Yo-Kai.

Nate encounters the monster Whisper who hands him a Yo-kai Watch. When switching it on, Nate sees colorful monsters all around him that have been invisible. Whisper tells him that many of the strange happenings in life are caused by these monsters (a family quarreI, bad colds, etc.). Nate starts ﬁxing problems by trying to persuade the monsters to stop being a nuisance and become his friends instead.

BRAND NEW EPISODES
REGULAR SHOW
Mordecai (a six-foot-tall blue jay) and Rigby (a hyperactive raccoon) are two best friends who take the problems and mundane tasks of their boring jobs to fantastical places.

Mordecai and Rigby face new adventures when avoiding their deadly-dull work at the park with Pops, a humanoid-looking lollipop who has spent his entire life there. Avoiding work doesn’t go over well with  their boss Benson (an anthropomorphic gumball machine) — but their efforts often result in insane escapades that delight Pops.

BRAND NEW EPISODES
CLARENCE
The world of Clarence may seem pretty ordinary, but through the eyes of Clarence, this average world seems extraordinary and is ﬁlled with mass amounts of wonder and possibility.

Tune-in and watch as Clarence and his two best friends, Sumo and Jeff, try and pause time, in the name of fun by illegally graphitising a mural on a wall at Aberdale Elementary to create their very own, real-life version of an arcade game, whilst they explore the legendary ‘lost playground’ yard in search of their old beloved playground equipment only on Cartoon Network, DStv Channel 301, Monday to Friday from Monday the 5th of September @ 07:35 CAT. 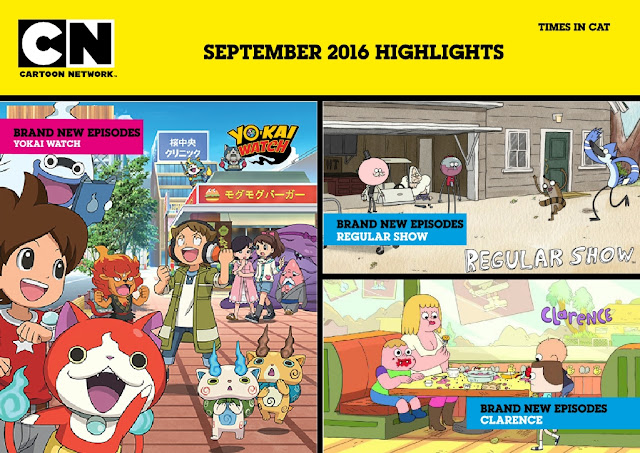