Wabbit is back! Returning to its slapstick-comedy roots, each episode of Wabbit contains two shorts, starring the famous Bugs Bunny as the main character being let loose in today’s modern society!  Viewers can look forward to the all-new Wabbit episodes where they can watch the mischievous bunny hilariously react as his peace and tranquillity is interrupted when Yosemite Sam begins mining in his home for coal, and watch how the cabin fever starts to creep in on Squeaks and Bugs as week three hits and they are still snowed in! Let the games begin - who will win the last bit of food left in the house?

Oggy would be the happiest of cats if three cockroaches, Joey, Marky and Dee Dee, hadn’t decided to become his roommates and get in the way of his laziness. They are really annoying and of course, they are the bad guys! What if Oggy wants a roommate, will they scare off anyone who is interested? If Oggy goes on holiday, they follow him and ruin his holiday fun! At least when Oggy’s furniture goes missing, Dee Dee tries to help ...Prepare for mischief, crazy chases and a whole lot of fun this month on Boomerang.

Join Boomerang to watch the top-secret, high-tech espionage war going on between cats and dogs, which their human owners are blissfully unaware of. These brand new lms uncover the truth about the high-tech, secret war being waged in neighborhoods everywhere that humans aren’t even aware of: an eternal struggle between the two great armies of Cats and Dogs. The story follows a Cat’s plan to destroy a new vaccine that, if developed, would destroy all human allergies to dogs, and the Dogs’ efforts to stop the Cats from execut-ing their plan. Who will come out tops? 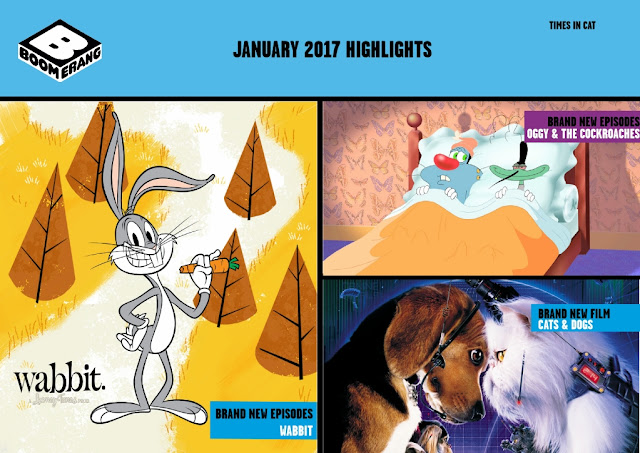