Turner Africa's Reach And Ratings Are Stronger Than Ever! 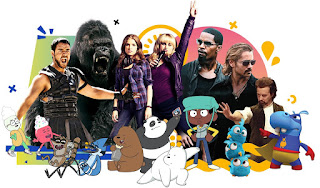 Turner Africa had a successful end to 2018, with the combined kids multiplex and general entertainment channel, TNT, achieving greater reach and rating results than ever before.
In November, Turner Kids celebrated 51 consecutive months in the #1 spot among pay-TV multiplexes in South Africa. Alongside this, Cartoon Network celebrated its highest-ever monthly share, and remained the #1 pay-TV Kids channel among kids aged four to 14-years-old.
Cartoon Network remains the favourite kids’ TV channel in South Africa, dominating the entire top 15 chart of best performing shows. The most popular shows vary between familiar faces such as Ben 10, alongside new Cartoon Network original hits like Apple and Onion and Craig of the Creek. Original Cartoon Network productions and Warner Bros. content totaled 77% of the most viewed content on the channel.
Cartoon Network continued with its high performance success in December, with the Power Rangers: Clash of the Red Rangers movie viewed by an impressive 239 000 kids aged four to 14-years-old, and the sneak peak of the new Cartoon Network Original Summer Camp Island claiming the second spot.
Boomerang is closing in on Cartoon Network’s ratings, after moving up to rank #2 amongst the pay-TV Kids channels for kids aged four to 14-years-old.
After benefiting from a fresh rebranding in September 2018, TNT Africa had an excellent month in October, with the highest performance ever in ratings (an average of 36 000 viewers). In November, TNT Africa broke a new record with 40 700 viewers tuning in (+13% month on month) and achieved its second highest performance in share (1.14%) since December 2016. TNT ranked #5, ahead of Studio Universal, for a second month in a row.
For the first time ever, not only did TNT dominate the Top 50 competitive movies in November, with seven movies on the Top 10 list, but the channel also secured the top three spots for the month.
For prime-time tune-ins, TNT remained on top of the podium. TNT's great performance was driven by viewers tuning in on weekday afternoons (averaging 83 000 viewers between 3pm and 6pm) and Saturday evenings during prime time (in November driven by the The Schwarzenegger Fan Month stunt). The stunt was a huge success, with the four Schwarzenegger movies, aired at 8pm, gathering an average of 202 000 viewers, resulting in a fantastic 3.8% in share!
About Turner International
Turner International is an entertainment, sports and news company that creates premium content and delivers exceptional experiences to fans whenever and wherever they consume content. It operates versions of core Turner brands, including CNN, TNT, Cartoon Network, Boomerang and TCM Turner Classic Movies, as well as country- and region-specific networks and businesses in Latin America, Europe, the Middle East, Africa and Asia Pacific. It manages the business of pay- and free-TV-channels, as well as Internet-based services, and oversees commercial partnerships with various third-party media ventures; it teams with Warner Bros. and HBO to leverage WarnerMedia’s global reach. Turner International operates 178 channels showcasing 47 brands in 34 languages in over 200 countries. Turner International is a WarnerMedia company.
Posted by Insidus at 00:44:00