In August 2019, NickToons Africa Will Celebrate Women With Marathons Along With Brand New Episodes From Your Favorite Characters 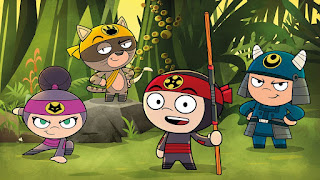 PEPPA PIG
NEW EPISODES
WEEKDAYS | 05 TO 16 AUGUST AT 12:50 CAT / 11:50 WAT / 13:50 EAT
Episodes 141-142,145-161 | x2 episodes back to back
Peppa is a very cute little pig that lives with her pig-family: big brother George, her mom and her dad. Peppa loves to play games, dress up nicely, take nice long trips and jump into mud baths. She always ends her adventures with lots of cheering and laughing. Her best friends always accompany her when she on her big adventures:
• Granddad Dog takes Peppa, George and Danny Dog to visit Grampy Rabbit's lighthouse.
• Suzy and Peppa start a Secret Agent Club – going on secret missions, and doing secret things. In secret. But soon everyone wants to join!
• Peppa and George wake up one morning to find that all the rain has made a flood, and their house is now a desert island!

CHOP CHOP NINJA
WEEKDAYS | 12 TO 23 AUGUST AT 15:40 CAT / 14:40 WAT / 16:40 EAT
Episodes 121-140 | Half carts
After suffering an especially humiliating defeat, the General quits being evil and opens a chicken restaurant. Iro is the only person in town who believes it is just another evil ploy and will stop at nothing to prove it!
While on a mission to retrieve a golden acorn for Master Enoki, the ninjas are taken away by a storm and find themselves stranded on a deserted island. Jo discovers that a dangerous creature lurks, but the boys don't believe her.

RISE OF THE TEENAGE MUTANT NINJA TURTLES
SATURDAYS | 24 AUG TO 05 OCT AT 17:10 CAT / 16:10 WAT / 18:10 EAT
Episodes 120-126 | Half hours
Deep in the sewers of New York City, Raphael, Leonardo, Donatello, and Michelangelo are four mutant turtle brothers in their early teens who go on new adventures where they end up tapping into mystic ninja powers they never knew existed, while learning to work together as a team and navigate the perils of the modern age and hidden realms in order to fulfill their destiny to become a team of heroes in the upcoming new episodes:
Mystic Library / The Purple Game Man vs. Sewer / The Mutant Menace

PIG GOAT BANANA CRICKET
WEEKDAYS | 26 AUG TO 12 SEP AT 20:30 CAT / 19:30 WAT / 21:30 EAT
Episodes 201-214 | Half hours
Pig wants to have a pool party. Goat gets confused for a secret agent. Banana beats the heat by stealing an ice cream truck. Cricket gets trapped in a cave.
On a road trip to go see the Pretty Panda at the zoo, Goat stops at a concert, Pig stops at a trampoline theme park. Banana has to do jail time and Cricket has to get him back.