Nickelodeon Africa Will Be Celebrating Women In August 2019 With Jojo Siwa Weekends Including Specials And Movies From Your Favorite Nick Gang, Joining The Channel's Lineup Is Brand New Episodes Of NOOBees And Rise Of The Teenage Mutant Ninja Turtles As Well As The Return Of Zoey 101 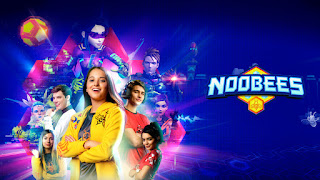 NOOBEES
WEEKDAYS | 12 AUG TO 06 SEP AT 17:45 Episodes 141-160 | One hour
When Silvia, who has no idea about videogames, decides to help her brother compete in an eSports tournament, she is not sure what she's getting herself into. As she delves into this "Noobee" world, Silvia will have to tackle some typical and not-so-typical teenage problems including falling in love with David, her game rival, while trying to resolve the mystery of her transformation into her in-game avatar, Kosnika. IT'S GAME ON for Silvia, but the question is "Is she up For The Win?"

RISE OF THE TEENAGE MUTANT NINJA TURTLES
SUNDAYS | 18 AUG TO 29 SEP AT 17:05 Episodes 120-126 | Half hours
Deep in the sewers of New York City, Raphael, Leonardo, Donatello, and Michelangelo are four mutant turtle brothers in their early teens who go on new adventures where they end up tapping into mystic ninja powers they never knew existed, while learning to work together as a team and navigate the perils of the modern age and hidden realms in order to fulfill their destiny to become a team of heroes in the upcoming new episodes:
Mystic Library / The Purple Game / Man vs. Sewer / The Mutant Menace

NED’S DECLASSIFIED SCHOOL SURVIVAL GUIDE
WEEKDAYS | 18 AUG TO 29 SEP AT 13:00 Episodes 301-321 | Half hours
Ned's Declassified School Survival Guide follows the lives of Ned, Cookie and Moze and their adventures in James K. Polk Middle School. The show deals with handling academic subjects, as well as social problems such as friends, lockers, projects, and tests. Each episode focuses on one main issue students normally encounter in school while providing tips on how to handle these situations, both comical and serious.

ZOEY 101
WEEKDAYS | 26 AUG TO 11 SEP AT 21:50 Episodes 401-413 | Half hours
Zoey's back for another year at the formerly all-boys boarding school, Pacific Coast Academy. A new year means new classes, new adventures, new friends and even a new roommate!
Zoey accidentally gets Coco fired and tries to help her get her job back.
A rumor surfaces that James and Zoey are dating. Now they must uncover who started the rumor.

THE BEST WOMEN’S DAY
SPECIAL EVER!
Nickelodeon celebrates the ladies that have no fear, are full of heart, follow their guts, strive for what they believe in, and make for the best kind of friend.
Don’t miss the BEST Women’s Day Special Ever!
WOMEN’S DAY SPECIAL
FRIDAY 09 AUGUST
FROM 07:15 Back-to-back episodes
BEST WOMEN’S DAY SPECIAL EVER
07:15 Charlotte Page: Henry Danger
11:05 Sandy Cheeks: SpongeBob SquarePants
15:20 Ivy: Cousins for Life
19:15 Ciara: Knight Squad

JOJO SIWA WEEKENDS
We know you love her and so does Nickelodeon. Whether she’s a secret crush or someone you admire, you can binge on JoJo Siwa special episodes for three glorious weekends!
JOJO SIWA SPECIAL EPISODES
SATURDAY 10, 17 AND 24 AUGUST FROM 12:55 With a repeat on Sunday 11, 18 and 25 Aug from 08:20
THE BEST JOJO SIWA EPISODES EVER
10 AUG • JoJo Siwa: My World • Lip Sync Battle Shorties • Blurt (movie)
17 AUG • Make It Pop • School of Rock • The Thundermans
24 AUG • Nickelodeon’s Not So Valentine’s Special • Nickelodeon's Sizzling Summer Camp Special • School of Rock